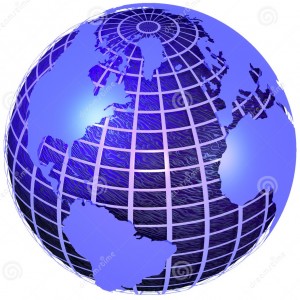 It’s been quite a while since I bear in my mind an idea of how the existence exists. I shared it with a few, and now I prepared to factualize it as a main Recepie of My Life!

It’s based on an image reminding us of a globe. The upper and the bottom points are the utmost points, which are equi-spaced as tangential imaginary points of one and the same “source” [of THE truth, THE knowledge, THE existence]. From inside of the “globe” there’s one united space and the distance between the points is irrelevant. When from the outside – it does matter that the points are equi-spaced and their distanced location can be visually measured by the grid of “meridians” and “parallels”.
Not that I was ever good at geography!

So, my understanding of existence is that it all is like a globe with all the essence like inside, where from people get their birth. By being born into our material world a person starts (let me say in masculine) his way from one of the points, let’s take a bottom one. In my concept, everyone is born there and then the upper point will be the other utmost point of perfection his born nature whereto the man tends to approach through his life.
The points are points of THE truth, THE knowledge, THE existence. By being born in one of them and reaching the other one, the man attains his own fullest perception within the overall existence (read THE truth, THE knowledge).
As many as there are “parallels” and “meridians”, there are that many ways one can take to go in his life.
Intersections of “parallels” and “meridians” create crossroads for people where they make their decisions, choose their behaviors and by such means take their turns left or right on the “globe”.
When looking for intellectualism, the utmost mind development, the man may use different techniques and tools like science studies, psychology practices, meditation, following religious confessions, self-digging – anything. All techniques with more or less success open up some of THE knowledge and take the man up the “meridians” bringing to new levels of the “parallels” in the direction of the utmost point.

Someone due to his own life perceptions moves all his life “in a circle” of the same “parallel”. Or can move “around a quadrant” making small steps up a “meridian”, to a side by a “parellel”, then down a “meridian”, and to the side of the same point where he’s been before.

Unable to “conquer summit” and «liberate» ourselves from “gravitational” force keeping us bound to the “globe” as the essence of our creation, which we have not succeeded to fully conceive, we remain in need of connection to it until our full Realization, which gives self-sufficiency and independence.
Without it, when we “die” having not reached the utmost point of THE existence, we can not embrace the whole “source” and return to be a part of it. We “slide down” again to the bottom point to be born for another try.

The one, who gets able to attain THE truth, he finds himself at the interjunction of all roads, at the intersection point of all possible ways (“meridians”) leading to the same Mind. Having realized THE mind and having realized himself with THE mind, such a man (whether a man or maybe a different creature then???) can stand stable on the top. Stand straight perpendicular to the point of his Base. The tangency surface is minimized and by this the man liberates himself from getting back inside for the next round of rebirth.

And while we experience our life, we get born in one “pole” and find ourselves on the lowest “parallels”. We “crawl” low keeping closest to the essence of our creation. Later with some development we can “get up on our feet” and “walk”, but we still “fall down close to the base” due to the lack of knowledge and experience. The more we develop, the better we can “straighten” ourselves and “step” with more confidence all along the life towards the utmost development point, point of the truth, the Knowledge, the Existence.

Here I stop and think: does this mean everyone slides down with the same zero result independently of how high he reaches on the parallels? hmmm… I have not got any idea about that yet and if I develop this thought, it’ll be pure thinking and making up. Maybe we are re-born at the level of the point we “die” at… And I think, it certainly matters for the man during his life in easiness of going up the “globe”, in enjoyment of the process … But I don’t know any more. I just like my theory as it also gives a possible clue to misunderstanding between people – as they are at different “parallels”, and different life spans, and maybe more.

* tovana – is insight. More about this word is here.

This site uses Akismet to reduce spam. Learn how your comment data is processed.